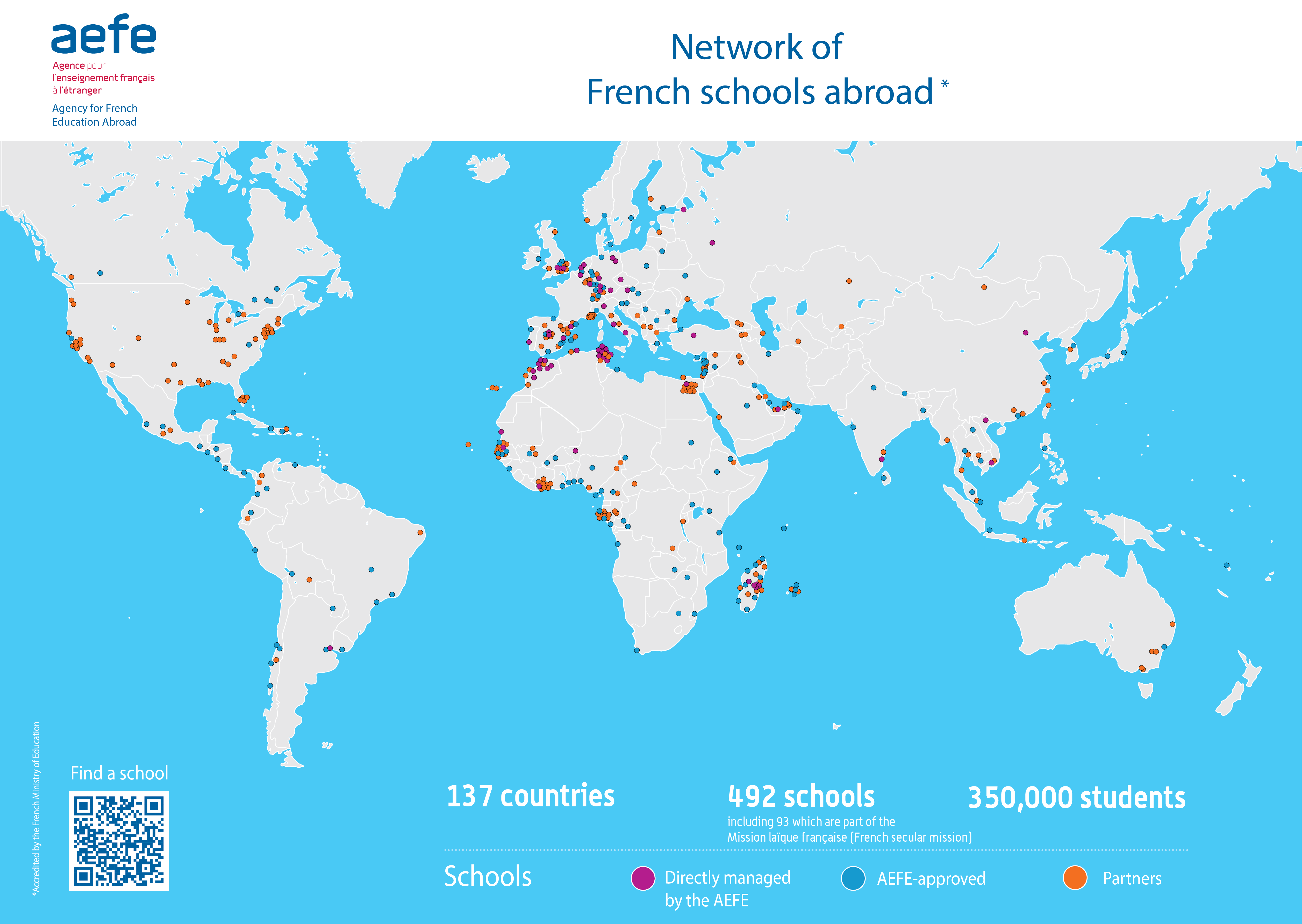 The Agency for French Education Abroad (AEFE) is a public establishment under the authority of the Ministry of Foreign Affairs that was created by the Act of 6 July 1990. It coordinates and manages the French education network abroad and has two missions: to ensure that there is continuity in the public education service for French children outside of France and to help spread French language and culture abroad. This school network, which is unique in the world, is made up of 522 educational establishments with almost 370,000 students from nursery school to the end of secondary school in 139 countries. The quality and uniformity of the teaching provided in these schools as well as their values are what makes this network, which is the largest of its kind in the world, so unique.

Schools are either directly managed (gestion directe), contracted (conventionné) or accredited (homologué). The schools provide an education based on the French national curriculum for pupils of various cultures from preschool through secondary school, and some receive substantial financial support from the French government. The schools provide an education leading to a baccalauréat, and students have access to all other French schools at their own educational level.

The education provided in French primary and secondary schools is innovative, open to the culture and language of the host countries, and provides enhanced foreign-language teaching from nursery school onwards. It prepares students for their future as multilingual and multicultural citizens and actors in open societies. The schools in the network must thus reconcile a French-style education with international-standard teaching, promotion of the French language with the development of multilingualism, and teaching which focuses on success for all and achieving excellence. The results are a testament to this excellence, with a baccalauréat pass rate of 97%, two-thirds of which are with honours.

French teaching centres abroad, by teaching students from many different nationalities and cultures, have a deep sense of respect for others and inclusion. The AEFE supports greater consideration for students with special educational needs and is committed to enforcing the concept of inclusive schooling.

The French educational system abroad is extended through a French alumni network (AFLM) which aims to maintain bonds of friendship and solidarity between all the people who have passed through it. This network is estimated to contain 600,000 alumni and has the potential to be hugely influential, as many alumni, both French and non-French and across the generations, hold distinguished positions in a wide variety of activities around the world: politics, the economy, higher education, the media and culture. These people are the best ambassadors for our educational model and often forge strong links with the French language and culture. Some well-known alumni include Carlos Ghosn (Lebanon), Boutros Boutros-Ghali (Egypt), Ingrid Betancourt (Colombia), Jodie Foster (United States), Marjane Satrapi (Austria), Jonathan Littell (United States) and Atiq Rahimi (Afghanistan).